The US Election - What are the likely implications for investment markets?

Posted by Daniel Frost in Kiwisaver, Retirement, Savings on Aug 30, 2020

The upcoming US election is almost guaranteed to generate some jaw-dropping headlines, which raises the question what are the most likely results and what are the likely implications for investment markets?

A combination of COVID-19 and an almost completely unpredictable standing president broaden the possible range of outcomes and as a result uncertainty. For instance, President Trump has made the unprecedented move of calling for a delay to the election, claiming that the significant increase in the usage of postal bailouts makes it difficult to ensure a fair election. 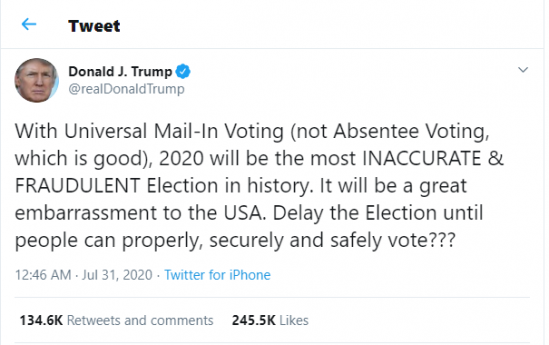 Of course, the President cannot delay the election on his own. Under the US Constitution, Congress is the only body that can delay an election. Republican Senators quickly dismissed this possibility.

Some commentators argue that this is a warning sign that the transition will not be smooth should Trump lose the election, which is widely predicted but by no means a certainty. They argue that Trump could use this as an excuse to delay accepting defeat. Other commentators argue that the process of counting mail ballots will not only delay the results but could also see significant swings in the level of support for the two parties over time. They argue that Democrats are more likely to use mail ballots because Trump has been anti-mail-in voting and so initial results will make the Republicans look stronger than the final results.

The conventional wisdom is that Trump remaining in power will see a modestly positive reaction in investment markets. Should Trump lose the election there is a real risk that the Democrats will wind back some of his tax cuts. In a recent research piece, UBS analysts estimate that this could have a -8% impact on S&P earnings. They go on to argue this risk is already being priced on the basis that the higher tax rate corporates have recently lagged the market. In a recent strategist call, T Rowe Price argued that the rollbacks would be delayed as a result of the economic fallout to COVID. They also argue that Democrats are likely to increase government spending which would boost S&P500 earnings by 3%. Another positive of a change in President would be that the markets are less likely to be caught off guard by a late-night tweet, which could reduce risk premiums.

A clean sweep of all three houses by the Democrats raises the possibility of more significant reforms. For instance, the Democrats could have another go at Healthcare reform, which is likely to be negative for the sector but has proven to be difficult in the past.

In summary, the re-election of Trump is on balance better for the share market, but there are pros and cons to both parties and the current economic situation limits near term changes. It is also worth noting that the increasing likelihood of a Biden win has already begun to be factored in by markets given his clear lead in the polls.

Regardless of the outcome, it looks likely that the final result of the election may not be clear on the evening of the election and some extraordinary antics are very possible. Markets don’t like uncertainty, but investors with a longer-term investment horizon can largely look through this uncertainty. There is an outside risk that the time taken to confirm the results is sufficiently long enough and the headlines worrying that companies decide to delay investment decisions, which would act as a drag on economic growth. This drag is likely to be on the margin and could easily be overstated. Consequently, any dramatic market moves are probably best viewed as an opportunity. If the share market drops, we will most likely use it as an opportunity to add to quality names in our investment portfolios.

It takes less than 2 minutes whether new or transferring

We can call you or you can call us on

Individuals or joint accounts only. Any other entities please call us.